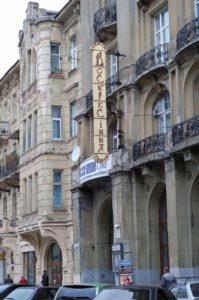 The Voskresinnia Lviv Academic Theatre was established in 1990 on the wave of social transformations and Ukraine’s regained independence. The new stage was created as a result of an agreement between young actors from different Ukrainian towns, who were not fully satisfied with the previously existing “slightly” academic theatre. Yaroslav Fedoryshyn, a graduate from the Faculty of Drama at the University of Kharkov and GITES in Moscow, a well-known artist and experienced theatre director became the head of the new theatre. The Voskresinnia Theatre quickly gained popularity, presenting world drama which had never been previously shown in the Ukraine. Step by step, by combining traditional acting styles based on psychological insight with the modern visual form, the group has elaborated a specific stage formula of its own.
For the last 20 years, Voskresinnia Theatre has been invited to perform in many cities countrywide. The Voskresinnia Theatre has also been invited to Poland several times and has participated in international festivals in Wrocław, Kraków, Gdańsk, Szczecin, Kalisz and Warsaw. It has taken part in international festivals in Edinburgh, Brest, Novy Sad, Ljubljana, Maribor, Holzminden, Arkhangelsk, Trabzon, Brest, Lenz, Cairo, Bratislava, Moscow, Seoul, Valladolid, Salamanca, Prague, Montegranaro and Teheran.
All the theatre’s performances have their own unique character. They are spectacular and beautifully acted. The most popular plays staged by the Voskresinnia Theatre are: “Three Sisters” by Chekhov, “Road to Damascus” by Strindberg, “Giants from Mountains” by Pirandello, “Job” by Wojtyła, “Annunciation” by Claudel, and recently “Western Bay” by Koltes.
Since 1996, the Theatre has specialised in open air productions. The boldness and spectacular style of performances combined with acting mastery have brought the theatre popularity and appreciation of the audience. In addition to its stage productions, the audience has been captured by its open-air performances such as “Barylief’s Fiesta”, “The Saint and the Sinful”, “Danylo Halytskyi”, “Gloria”, “Job”, “Cherry Orchard”, and recently “To Meet Prospero” and “Pinsel’s Mystery Play”. Thanks to these productions, Voskresinnia has become an unquestionable leading street theatre in the Ukraine.

In 2010, in recognition of its artistic achievements, the theatre was conferred a highly prestigious title of the Academic Theatre by the Ukrainian Ministry for Culture.